Photo of the Week #40 - Walking Bridge 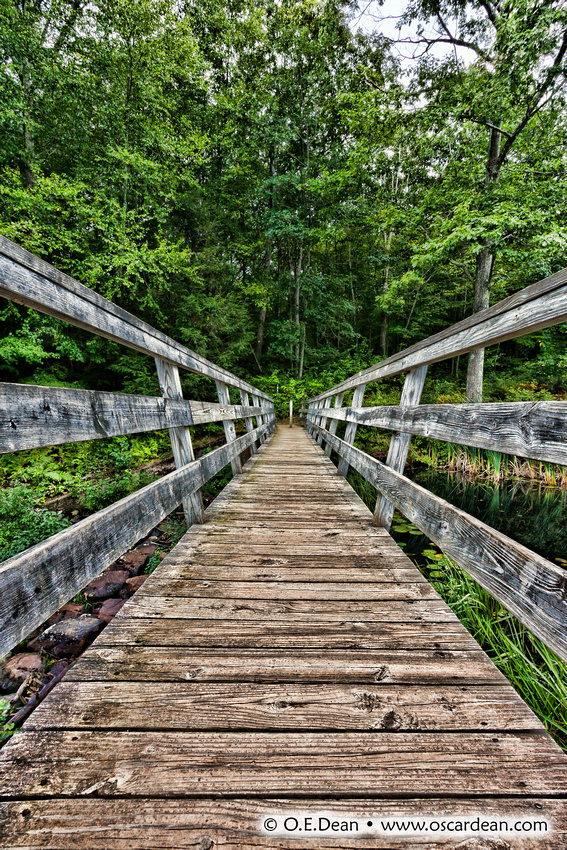 The photo above was taken at Gay City State Park in Hebron, CT.  I've never been to this park before so I really didn't know if I would find anything worthwhile to photograph.  To add to the challenge, the weather on that day was dreary gray overcast skies and CT. had not had any rain for over two weeks!  The lakes at this park were stagnant and accompanied by a green color and the stream had nearly dried up!  I am sure this place is beautiful during more bountiful times but with all of this stacked against me, I was determined to capture at least one good image before I left.

After walking past a wooded picnic area which overlooked the lake, I spotted a narrow wooden bridge allowing visitors to the park to walk over the waterfall.  A photo of the bridge with the water flowing beneath it would have made a wonderful picture but there was absolutely no water at all due to the long absence of rain.  It was completely bone dry where the waterfall should have been, making this area completely unappealing for a nice photo.  Although I was a little disappointed in this current state of affairs, I continued on my quest to craft a "keeper" photo.

My thought process was to minimize or eliminate any bad elements such as the overcast skies and the dried up waterfall as I set out to compose a photo.  After pondering the situation for a little while, I decided to make the bridge be the focal point of the image rather than capture the entire scene with the bridge and its surroundings.  Composing the photo as you see above kept the missing waterfall out of view and the low vantage point minimized the emphasis on the bleak and dreary sky.  The prominent lines from the bridge's railings lead the viewer's eye deep into the distance on the other side of the bridge.  In the end, I am happy with this photo and I look forward to coming back to this location during better conditions with the intention of getting some amazing photos.